It Was Under 5 feet of Water and Is Still Outperforming!

HSGs Where the Ground Freezes And The Hills Rise 600-1,000 Metres Above Sea Level

It can blow from every direction and we can still miss the rain.  The ground freezes in winter and the hills rise from 600 metres to 1,000 metres above sea level.  There is a real determination to improve pastures.  Different ryegrass cultivars have been tried for more intensive grazing and so far the HSGs with clover initially sown into the 10ha paddock is showing the most promise.  We had 330 small lambs on the HSGs after weaning and then calves again three weeks later and they had all blown out incredibly.  The lambs went in at 18-22kgs and eight weeks later we took the tops out of them at 36kgs, so they did put on incredible growth and almost caught up with the middle mob.  If you can finish them on grass and don’t need to feed them on a short-term forage crop then that’s a real cost saving.

Ewe hoggets recently sold at live-weights above 48kg after averaging an increase of 5kg in just 12 days on HSGs with clover – a growth rate equivalent to 400 gms a day that matches the best expected of lambs on any farm.
‘That’s after the worst winter we have seen here.  We had snow over the top of fences.  Some may think we are not capable of growing heavyweight lambs up here but we are doing it.  A further bonus in HSG pasture is its dense growth crowding out thistle and browntop grass regrowth.’ 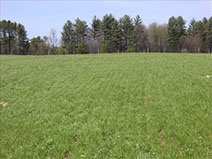 AberDart HSG has survived for three years now in the upper peninsula of Michigan!  It appears that the key to winter survival is to maintain a minimum of 3 inches of stubble heading into winter and then make sure to wait a little while after Spring growth begins before grazing.  It seems that the HSG varieties are one of the first grasses to start growing and as a result people turn the animals in to graze before the plant has been able to restore the carbs consumed over the winter.
“I rated the High Sugar Ryegrass stands today and looks pretty good.  I was surprised to see these High Sugar Perennial Ryegrasses survived the third winter here in the UP.  Amazing!”

Increase In Milk The Next Day

“The anecdotal evidence from farmers (about High Sugar Grass) is very strong,” says Richard Devlin, who has dairy farmer clients seeing an increase in the milk vat the next day from cows grazing High Sugar Grass.  At CRT, Mr Devlin says both cows and lambs show a grazing preference for High Sugar Grass, as clearly seen on farms with an open gate policy “where they may finish 1,000 lambs in six paddocks and find ninety percent of them will stay in the HSG paddock”.
Scientists Show High Sugar Grass Offers Protection From Pests
Lincoln University and AgResearch scientists did not expect results indicating that the HSG AberDart with AR1 endophyte (a fungus to increase resistance) is less susceptible to damage by Argentine stem weevil.  The poster paper was published for the 70th New Zealand Grassland Association annual conference at Blenheim October 14-16, 2008.  It reported (HSG) AberDart’s resistance to the weevil as “perhaps suggesting that other metabolites associated with HSG cultivars have an important role to play in susceptibility to ASW”, Germinal Seeds NZ Ltd general manager David Kerr.
HSGs improve animal production and reduce environmental impact by enabling more efficient rumen digestion of grass protein with less nitrogen waste, and this latest finding makes it even more appealing,” said Mr. Kerr.
Figures also show that the WSC content, or sugar, in AberDart was on average nine percent higher than in the standard ryegrass during the trial and ahead of the tetraploid ryegrass.
The paper was written by Lincoln University scientists Dr Rachael Bryant, and Dr Grant Edwards and AgResearch scientists Dr Tony Parsons and Dr Susanne Rasmussen.

Planting HSGs Because They 'Do The Job'

We rear and finish stock (to slaughter weights) and I think there is a case for more trading, mostly of cattle, which we could do by reducing breeding stock,” says John McIntyre (Nahuka NZ).  His degree in agricultural science has given him a running start in growing lambs to heavier weights in quicker time and to run more cattle.

Among his initiatives on the family farm was the sowing of 35 hectares of HSGs which had a profound impact on September-born lambs now being grown to 55 kg liveweight by early December.

“We previously struggled to get any lambs off before April and they struggled to make 14 kg carcass weight but now we are sending off about 100 every two or three weeks from early December (to July) at an average of 17.5 kgs,” said John.  This autumn more High Sugar Grasses will be sown “because it does the job”.  The shearers would agree, said John, because they had difficulty pulling heavy hoggets (one year old lambs) across the boards.